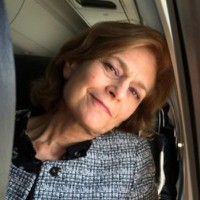 Robin is a Principal and co-founder of MediaCombo, Inc, a creator of immersive digital experiences for museums and businesses. Their most recent project is the Augmented Reality Audio Tour for The Morgan Library & Museum, co- produced with AR mobile tour platform, GuidiGO. Robin is a creative digital media producer with an extensive track record developing robust, content-rich, digital products. She has a strong focus on editorial content and user experience.

Robin has been working with museums since the late 1990s. Her clients at MediaCombo include a broad spectrum of internationally known cultural organizations and corporations, ranging from the Brooklyn Navy Yard to the Metropolitan Transit Authority Capital Construction Company (MTACC), from The Museum of the City of New York (MCNY) to the International Center of Photography (ICP), from the American Museum of Natural History, to the Jewish Museum.

Her projects have won numerous awards from the American Association of Museums, as well as Communicator, Web3.0, Telly, NY Film and Video Festival and World Houston awards.